One common example of statistical hypotheses testing is means comparison. Imagine that you’re analyzing results of a survey about the dependence of gender and wage. All you want to know is whether any difference in average wages exists or not. Let’s illustrate this case with the data of the survey Wages, Experience and Schooling. Its results contain data about hourly wages (in dollars of 1980) of males and females in USA in 1980.

The first thing you can do is to calculate average wages for females and males correspondingly:

However, you couldn’t just compare these numbers and make a conclusion from it. No! Firstly, you need to understand what the population you want to make a conclusion about. In our case we’re dealing with two populations – males and females in USA. However, we don’t have the data about the whole population. All we have is our survey data which presents just two samples containing randomly selected men and women in USA. We’re using samples as an approach to investigate populations. When we calculate a sample mean, we use it only as an estimation of a population mean. This estimation has an error, i.e. actually a population mean lies in the interval (sample mean - error, sample mean + error). This is called a confidence interval.

What are the confidence intervals?

Firstly, we need to familiarize ourselves with probably two most important theorems in the world of scientific research: Law of Large Numbers (LLN) and Central Limit Theorem (CLT). The latter one is actually a set of theorems, but it doesn’t matter for now. I will present you a brief overview of them but if you want to get a deeper understanding, watch this.

Law of Large Numbers (LLN)
This theorem tells us that if we have a sample with a number of observations approaching to the infinity (in practice, we should have at least 30 observations) then a sample mean is a good approximation of a population mean :

If we standardize , then we get the following:

This will allow us to use the properties of Standard Normal distribution: 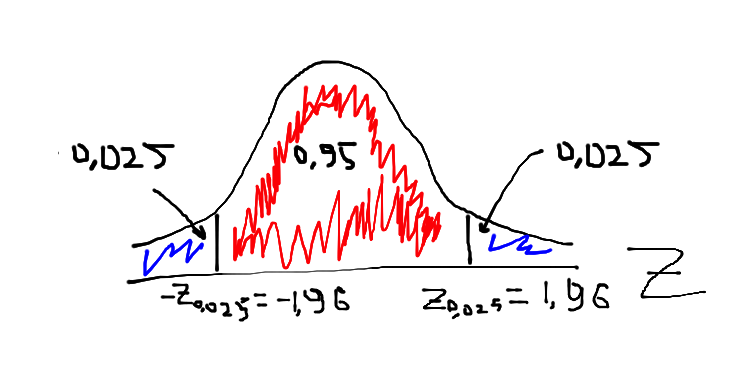 On the picture above we could see Z-score (or technically standard normal distribution). We know everything about this distribution and especially that 95 % of distribution’s values vary between -1.96 and 1.96. Stop. Does it mean that 95 % of values of our random variable also lie in the range [-1.96, 1.96]? Yes, exactly! Let’s write this in a more statistical way:

So, it means that the actual mean with 95 % probability will lie in the interval . If we want to get the interval at another percent of confidence, e.g. 99 % or 90 %, we just need to get the corresponding Z-value.

Cool, we understand the concept of confidence intervals. Let’s come back to our example of comparing wages of males and females in USA. We’ve already calculated means so now we just can use what we’ve learned or not? Practically yes, but there is one detail we need to take into account. We don’t know anything about males’ or females’ wage distribution except our sample. It means that we don’t know neither neither . In this case people use a sample variance () as an approximation of a population variance () and a t-statistic instead of a z-statistic. Why a t-statistic? Because t-distribution converges to Normal distribution when a sample size is big enough and it has fatter tails when a sample size is small (n < 30): this makes it more reliable for an estimation of confidence intervals and prevents its underestimation.

The final formula for the confidence interval for we’re going to use will be the following:

Finally we can calculate the confidence intervals:

R code for these calculations:

Okay, now we see that average wages for males and females are really different because confidence intervals do not have intersections. We see that with a probability 95 % the average wage for females varies from 5 to 5.29 while for males – from 6.15 to 6.48. We can conclude that on average males earned 22.5 % more than females in USA in 1980.